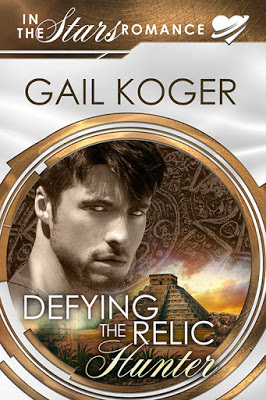 Kizzy sees dead people, but she’s a thief and talking to dead folks is about as useful as a three-legged horse. The Dragos clan booted her out when her year’s take was a lousy five hundred and sixty credits. The only way back in is to pull off a million-credit heist. Alone.

When Kizzy’s jobs as a roadkill collector and medical test subject goes south, she decides taking Montezuma’s gold away from an Indiana Jones wannabe is the ultimate heist.

The snag? The Indiana Jones wannabe is Ethan Jones, a dangerous Coletti Warlord. Now that she’s caught his attention, he’s determined to capture her as his prize.

Can the ghost whisperer defeat the big, bad Warlord? Defying the Relic Hunter!!

EXCERPT
My clan is filled with accomplished conmen and thieves. The more loot you bring in the higher your status. To date, I’ve brought in five hundred and sixty credits. Uncle Aldo had faith in me. My clan not so much. They booted me out. The only way back in was to pull off a million-credit heist. Alone.

I was twenty-two with no real job skills, no money and the realization I hated being a thief. To keep me from becoming homeless Uncle Aldo rented me a cheap apartment on the sly. After a month of searching, I managed to find employment as a roadkill collector. My job was scooping up the mangled furry bodies. I was ecstatic. It paid twenty credits an hour but working in 110-degree temperatures was tough. I lasted a month before I ended up in the emergency room from heat exhaustion.

My second job was cleaning gross, fly infested porta-potties, which earned me another trip to the hospital for dehydration. The only upside of that nasty job was I happened to be in the right place, at the right time to rescue a three-year old girl from her kidnapper. Uncle Aldo had a fit when my picture was plastered all over the news vids. Being a heroine got me nada.

Utter desperation drove me to become a research subject in an experimental drug trial. When I started babbling about seeing dead people, they abruptly showed me the door.

I was a 9-1-1 dispatcher for the Glendale Police Department and to keep from going totally bonkers – I mean people have no idea what a real emergency is. Take this for example: I answered, “9-1-1 emergency, what’s your emergency?” And this hysterical woman yelled, “My bird is in a tree.” Sometimes I really couldn’t help myself, so I said, “Birds have a tendency to do that, ma’am.” The woman screeched, “No! You don’t understand. My pet parakeet is in the tree. I’ve just got to get him down.” Like I said, not a clue. “I’m sorry ma’am but we don’t get birds out of trees.” The woman then cried, “But… What about my husband? He’s up there, too.” See what I had to deal with? To keep from hitting myself repeatedly in the head with my phone I took up writing.

Gail Koger will be awarding a $15 Amazon or Barnes and Noble GC to a randomly drawn winner via rafflecopter during the tour.

6 thoughts on “DEFYING THE RELIC HUNTER by Gail Koger”