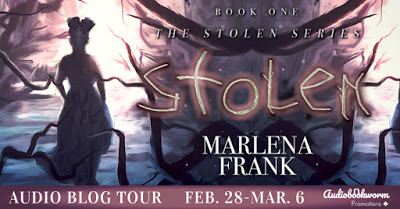 It’s difficult taking care of a delusional father by yourself. Sixteen-year-old Shaleigh Mallet would rather explore and photograph dilapidated buildings than cater to her father’s dark episodes. But when she’s kidnapped by a creature who carries her atop a flying bicycle into another world, she realizes this wasn’t the escape she wanted.

In a kingdom known as the Garden, where minotaurs pull carriages and parties are held in hot air balloons, Madam Cloom and her faerie servant, Teagan, rule over the land with incredible but terrifying magic. Shaleigh must prove that she is the reincarnation of a long-dead ruler, not because she believes it, but because it’s her only chance to survive. With the help of a trespassing faerie, a stoatling, and a living statue, Shaleigh hopes to outwit everyone. She aims to break the bonds of servitude and finally make her way home. What she doesn’t realize, however, is that she’s playing right into the hands of a far worse enemy.

About the Author: Marlena Frank

Marlena Frank is the author of books and novellas that span genres from young adult fantasy to horror. Her debut novel, Stolen Book 1 of the Stolen series, has hit the Amazon bestseller charts twice. She has two books coming out in 2021: Chosen, the final book in the Stolen trilogy, and The Impostor and Other Dark Tales, a collection of dark fantasy and horror short stories.

Marlena has also written several fantasy and horror short stories, which have been included in notable anthologies such as Heroic Fantasy Quarterly, Not Your Average Monster Volume 2, and The Sirens Call issue #29.

Although she was born in Tennessee, Marlena has spent most of her life in Georgia. She lives with her sister and three spoiled cats. She serves as the Vice President of the Atlanta Chapter of the Horror Writers Association and is an avid member of the Atlanta cosplay community.

She is also a Hufflepuff, an INFJ, a tea drinker, and a wildlife enthusiast.

Caoilainn is a narrator hailing from Los Angeles, they work from their professional home recording studio. Having grown up in the generation inspired by the Disney renaissance, they fell in love with animation and the voices behind the characters. Having been an avid reader, Caoilainn was originally going to school for animation and game design but switched their career path when they learned about audio books and how one person could bring so many characters to life. They started their Voice Over career in early 2017 and it has been their primary focus since then.