A sci-fi espionage by Nathaniel Henderson 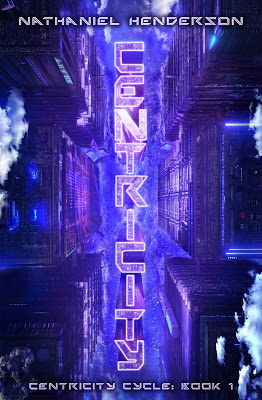 The world already ended once. Now it\’s up to an outgunned negotiator, a disavowed spy, and an immersion-addicted hacker to stop it from happening again.

Centuries after the Fold, civilization is fragile. In the megacity of Naion, people live stacked in arcologies, most never going outside because the air is another enemy. Instead, freedom comes from technology: bodytechs modify the human form while synthetic intelligences whisper through brainware.

Now a new bridge between man and machine has emerged, one that could destroy humanity’s second shot at survival—or save it, depending on who gets to it first….

Adasha Denali is one of the government’s best dispute resolution specialists, but when a scandal threatens to destabilize the city and end her career, she’ll need more than words to escape the fallout. Venturing out of her office and into a fight for the future, she’ll team up with a disavowed spy, learning the hard way that betrayal wears many faces, and one of them may be her own.

Neon Nik is an immersion-addicted IT freelancer struggling to pay off debts to circling loan sharks. Threats of dismemberment become the least of his problems when a surprise inheritance throws him into a vortex of corporate kill squads willing to burn the city down to find him.

NIK SMILED AND the building smiled back, its façade all black teeth angles and white gum signage held together with cables and fat tendrils of epoxy. Poetry curled along the bulging geometry, hand-painted in dead Persian. He’d never bothered to have his software translate it. In an age of information bloat, ignorance was a proactive sport.

Above the entryway a single word blazed: HALE.

Two store fronts down, a woman rested against the shell of a mutilated cleaning bot. The glow of her cig warmed her blank expression. Another silhouetted figure pissed into a gap between buildings.

Hands in his pockets, Nik rolled his too small shoulders in his too big jacket. Soft with age, the leather made no sound. Canopy environmental systems kept temperatures chilly or warm but never quite comfortable. He coughed and thought about clearing his throat onto the sidewalk, decided not to—didn’t want to waste the residue of his last Cinnamon Fire—and crossed the street to Hale. Underfoot, a trampled stew of discard formed the menu of some future archaeological buffet.

The air inside hinted at decomposing animals in heating ducts. Ironic, considering this was the Canopy’s premier breather bar, where patrons sucked down spiked air cocktails.


~Buy Centricity on Amazon
~Follow the rest of the tour

Nathaniel Henderson was born in 1983 in Albuquerque, NM, USA. At a young age he moved to Tulsa, OK, where he spent the next fifteen or so years surviving adolescence. After graduating from high school, he packed it up and headed out west to the picturesque Santa Cruz, CA to attend UCSC. After a year of wrestling with computer science, he transferred to San Francisco to study computer animation and special effects. The career didn’t stick, and he set off to teach English in South Korea, Thailand, and finally Tokyo, Japan, where he currently resides.

Nathaniel Henderson will be awarding a $40 Amazon or Barnes and Noble GC to a randomly drawn winner via rafflecopter during the tour.