Guest Post: Blood on the Page by EV Knight

Blood on the Page

Joni Mitchell wrote “you don’t know what you got till it’s gone,” and I can only assume she was referring to our blood supply. Most of us, if asked, would have to admit that we don’t know how much we’ve got in there but we sure would know it when it’s gone—or wait, we wouldn’t because we’d be dead. But at least we’d know it as it was leaving, although only for a little while and then, yeah back to the whole dead thing. But I digress. The fact that we have no idea how much blood the average human has or how much we can lose and still function or even what the process of losing blood looks like has allowed for some pretty insane fiction both written and on the screen (I’m looking at you Quentin Tarantino). Some, of course, is funny and meant to be over the top but if you want to write serious, frightening scenes of blood loss, you should probably know some basics of circulation, blood supply, function, and effects of lack thereof. And don’t worry, this is not going to be a boring anatomy lesson—although there will be a diagram of the human circulatory system at the end of this that I want you to label and then send in for credit.

Let’s start with the very basics of blood. Blood consists of a number of things designed to carry oxygen and nutrients to the lungs, to form clots to prevent loss, and to fight infection. Our focus is the oxygen transport, because no oxygen=no brain function=death. Blood runs through two different kinds of vessels to all the organs and tissues of the body. The arteries carry oxygenated blood from the lungs to the body and the veins carry deoxygenated blood back to the lungs. Oxygenated blood in the arteries is bright red and deoxygenated venous blood is dark purple. The circulatory system is a closed system and the heart is the pump that moves blood through. Arterial blood circulates via a straight push from the heart, whereas venous blood runs passively, getting pushed along by the strong pulse of arterial blood. This is important to know as a writer because: cut an artery: spurt bright colored blood, cut a vein: ooze thicker, purple colored blood. I’ll come back to this in a little more detail in a moment. Blood fresh from a wound is just slightly thicker than water, is slippery at first but begins to clot, thicken quickly, and become sticky.

We only have a finite amount of blood inside us at one time. The average adult body contains about 1.2-1.5 gallons of blood which is around 10% of our body weight. Babies, by the way, carry much less—about a cup or the same as an average sized cat. Children up until the age of six range from the one cup to the 1 gallon as they grow, but after the age of six, they have roughly a gallon too. But we’re talking science so no more of this gallon nonsense. The adult body contains about 4.5-5.5 liters of blood (1 liter=1000ml. You’ll need to keep this image in mind as we talk blood loss). When you give blood, you give about a pint of blood which is about 10% of your total blood volume (TBV).

Another caveat to remember is that a larger person will carry more blood. Meaning a 200lb man will have a lot more total blood volume than a 100lb woman and could conceivably lose more blood without dying. Another thing to consider is the body build of the person—fat, lean muscle, athleticism also affects blood volume. So if your character has a unique build or is an Olympian, you may need to consider checking out an online blood volume calculator but only if you want to get super technical or you want to use it as an excuse later when your character shows up much to the shock and chagrin of the villain who then screams “How can you be alive? I watched you bleed to death!” and your hero raises a finger and an eyebrow and says cleverly, “Ah, but what you did not know about me, is that I am an Olympic swimmer. I have a greater blood volume than the average 75kg man! Haha! I survived.” Otherwise, I think it is safe to assume your character has 5 liters of blood and go with that.

*Fun fact of the day: Andre the Giant, weighed 525lbs, had about 21 liters of blood inside his massive physique. (for funsies: A blue whale has 220 liters of blood, so I guess Andre wasn’t quite as big as he thought he was, huh? jk.)

Remember when I said donating blood gives up about 10% of your TBV? How do you feel after that? Probably fine, maybe a little dizzy, maybe suddenly craving a dixie cup of juice and a cookie. Mostly, you’re OK. But what happens when we lose more than that?

Just take a gander at this helpful chart: 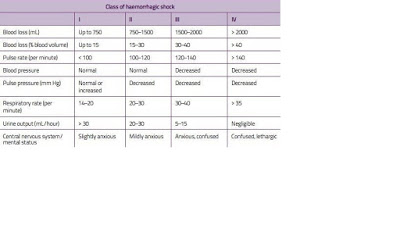 Remember 1000ml=1 liter. Pulse pressure means how hard the beat of blood flowing through the vessels is. If you felt their pulse, you might feel it pounding or normal and then as blood loss continues, it will be harder to find. A normal respiratory rate is 12-14 breaths per minute, sometimes less. So, as we lose blood, we breathe faster, trying to get more oxygen into our system as the organs are not getting it from the blood. Urine output is probably not that important for a writer to know unless you want to get real detailed and be like “This is terrible, she has overactive bladder syndrome and so typically she’d need to pee by now, but I suspect this is far too much bleeding and it’s affecting her urine output.”

Class I and II blood losses are in the range of normal losses during major surgeries. Most adults can replenish their supply in 6-8 weeks. (For instance: a woman loses around 500-1000ml of blood during a vaginal delivery and 1000-1500ml in a Cesarean section.)

Beyond the mental state and CNS affects, as we get into class III, the person will typically experience cold hands and feet as well as numbness and tingling. The body will reroute blood to more vital organs and slow or shut it down to unnecessary things like hand, feet, ears. Class III is survivable with medical attention and transfusion. Class IV would need swift attention and even then, may not survive (at least not with all facilities intact). They can have a heart attack from blood loss, they’ll need to be put on a ventilator, organ systems will start to shut down (such as kidneys) and death is pretty likely.

*FYI fact of the day: A menstruating person loses (normally) 1-3 tablespoons of blood during her period. It seems like more/looks like more but that is due to tissue and mucus mixed in. The body will replenish this supply in a week.

Writer craft idea: If you want to really visualize these amounts of loss, an easy thing to do, is get 5 liter bottles and fill them up with colored water or if you really want to do something different and more wasteful, you could fill them with jello water (after you’ve mixed it all up and BEFORE you put it in the fridge). Then, decide how much your character is going to lose. Get a couple pack of “puppy pads” (those square blue pads you lay down on the floor to attract puppies to pee on them instead of your groovy green shag carpet.) and dump that amount out onto them. It’s a way to visualize the puddle and how much of it you’d see. For even more fun, if you used gelatin, you can throw the pad in the fridge and then later see what the crime scene investigators would see hours later when the blood pool clots.

I said we’d come back to the whole spurt verses ooze thing, so let’s finish up with a combo anatomy and physics lecture! Can you imagine a better combo? Chocolate and Peanut butter doesn’t even come close! Plus, I did warn you about this quiz.

As you can see in this labeled (you’re welcome) picture, blood vessels come in a variety of diameters. The bigger the diameter of the opening in the “pipe”, the more volume lost in less time. But the bigger the diameter of the opening, the less spray or launch of blood. Think of a garden hose. You put your thumb over half of it to make the spray further so you can soak your sibling as they think they’ve outrun the hose. HA! They can’t beat you, because you know physics. The femoral and carotid arteries, if severed, will cause a tremendous amount of blood to just pour out in very little time, but if punctured will spray across the room with each pump of the heart. Remember the blood pressure in the chart above, as blood loss continues, the pressure drops and even a puncture in the carotid will slow to a “blurp” instead of a spurt.

Well, that’s it for the lesson. I really hoped this helps you when your writing a blood-filled scene or even the scene where someone comes upon the victim. Feel free to shoot me a question anytime if you come upon something medical you need help with. In my non-writing life, I am a surgeon/Ob/Gyn. I know a lot of baby delivery stuff too.

Have a Bloody good day!

EV Knight writes horror and dark fiction. Her debut novel, The Fourth Whore, was released in early 2020 by Raw Dog Screaming Press. A novella titled Dead Eyes is due to be published in November 2020 as part of Unnerving’s Rewind or Die series. EV’s short stories can be found in Siren’s Call magazine and the anthologies: Monstrous Feminine from Scary Dairy Press, The Toilet Zone from Hellbound Books, and More Lore from the Mythos from Fractured Mind Publishing. She also had a poem in the HWA 2019 Poetry Showcase titled “Nothing”. A graduate of Seton Hill University, she received her MFA in Writing Popular Fiction in January 2019. She enjoys all things macabre; whether they be film, TV, podcast, novel, or short story. She lives in the cold northern woods of Michigan’s Upper Peninsula with her family and their three hairless cats.

–www.evknightauthor.com
–EV on Facebook
–EV on Twitter Check out The Fourth Whore, available from Raw Dog Screaming Press and Amazon.

Kenzi Brooks watched The Scribble Man collect her brother’s soul after a hit and run when she was seven. He gave her a present that day—a lucky rabbit’s foot. Sixteen years later, she no longer believes in The Scribble Man, she believes in survival and does what she has to in the slums of Detroit. When thugs kill her mother and beat Kenzi to near death, she accidentally releases Lilith from her prison within the time-worn keychain.

And Hell hath no fury… Lilith is out for revenge. Revenge against God, Sariel (Angel of Death and Kenzi’s Scribble Man), and all of mankind for relegating her to nothing more than a demoness for refusing to submit to her husband. She’s put together an apocalyptic plan to destroy everyone who has forsaken her. Forget the Four Horsemen, Lilith is assembling the Four Whores.

Will Kenzi rise against her to save the world and The Scribble Man or will she become The Fourth Whore?