The threat of rift invasions seem long passed. Plentiful harvests abound. The Murian first-contact Terato Outpost has grown into the sprawling Terato-Murian Terminus Terato with a hub of relay portals reaching across the vast uncharted galactic expanses and connecting with its eon-extinct Lantaraan prehistory.

An exploratory Terato-Murian Jupiterr outpost is established on the gas giant seventh planet, and its quantum and gravitational energies are used to power outpost portals for an archeological survey of the fourth planet, Eorthe.

The Lantaraan database aboard Terato’s ancient Downday moon shows that one or more planets of the Solaris planets have apparently been lost. Expanded archeological records on other Lantaraan orbital bodies in the Solaris system show the fourth planet from the star—Eorthe—to be a sterile wasteland. Except it is not. Eorthe’s civilization is not to the level of the Murian Empire, but it is far advanced to those of a pastoral Terato. Terato and Eorthe form the confederated United Terran League under the nominal figurehead leader of League High Judikarr Eklam a’Qoc.

Jupiterr outpost expands into a major League stronghold, Jupiterr Base, when civil unrest erupts in the League, the unexpected return of rift intrusions threatens, and the Murian Emperor Klarvko Celo is assassinated.

As they prepare for confrontations with an unknown ancient enemy, the internal tensions on Myr and Eorthe push Murians and Teratoans to dangerous discords.

EXCERPT
The first anomalies were logged by remote nanoparticle quantum-field sensor arrays positioned on uninhabited dwarf planets, moons and long-orbit asteroids of the star systems of the League. The inconsistencies were short sub-fracture durations and were seismically unremarkable. Across the League’s far-flung frontier systems, seasoned operators monitored the encoded decryption of the scan-logs. Through decades of use, the linknet had become indispensable; supplanting the slower interstellar particle entanglement-based trans-light travel. Linknet protocols established allowances for such random background fluctuations with standard deviations measured against system parameters. The diverse configurations of the link systems were accepted as fail-safe.

The erratic anomalous spacetime oscillations data was logged. The ruse was almost perfect. Except star-core substrate logs registered converter power for the unsanctioned personnel requisition of translinks coordinates for specific network portals. It was a simple oversight but one that had sa s\’Blikova\’at consequences. Besides, waiting one more day wouldn’t matter.

The following morning Marleen and her three sons would be alone.

AN INTERVIEW WITH HAWK
-What inspired you to become a writer?

The love of a library my mother taught me plus the tales my mother & gran’ma spun on the front steps or porch swing in the evening with lightening bugs all around us.

Same thing I do every day between computer keyboard breaks – sit on the porch swing with hot tea/coffee/soup (depending on the time of day), enjoy a good biography AND the peace & quiet & earthy smells of pines, sweetgum, leaf mold & the river while watching otters, egrets, gators, kingfishers, song birds – thankful for all the things I’m fortunate to be able to enjoy – then sip another ‘cup’. Ain’t it great!

That his reveries yearn for the slower-paced times of villages & hamlets before Terato’s seasons of harvest and planting and Outpost Terato brought a future that Teratoans knew of only through their sagas & legends.

Eklam a’Qoc & wife Marleen. Not ‘out’ for drinks. Out on the veranda of the a’Qoc villa, the hustle & bustle of village and the seasonal farmers’ markets. Intergalactic obligations put away, the rolling precipitous splendor of the surrounding hills, mountains, valleys and meandering river stretching undisturbed into mellow watercolor Terato dusklits.

Buy him double shots of double-distilled corn liquor & ask him if he’s gonna to keep the gal in the satin getup waiting any longer? Remind him that his 30-minutes rental time is about up. Is he gonna insult her? They be not enough time for a skin-duel & pistol-duel.

Genre is like writer’s block. Genres are for the how-&-why of bookstore shelf space. The other doesn’t exist. A tale well-spun involves characters with all so-called aspects of genre unless the character is intentionally a one-dimensional cutout. 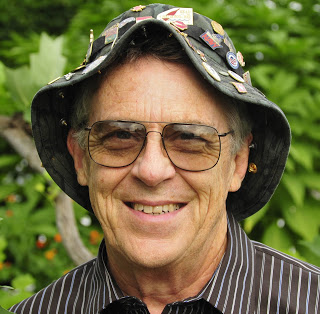 Hawk has authored several works of fiction including a historical romance Moccasin Trace which was nominated for both the prestigious Michael Shaara Award for Excellence in Civil War Fiction and the Writers Notes Book Award. His Cairns of Sainctuarie Science Fiction Series and his Moccasin Hollow Mystery Series have received national and international attention.

With postgraduate degrees and faculty positions in several medical universities, Hawk MacKinney has taught graduate courses in both the United States and Jerusalem. His professional writing includes articles on chordate neuroembryology, and aerospace research on muscle metabolic behavior in multi-orbital environments.

Hawk MacKinney will be awarding a $20 Amazon or Barnes and Noble GC to a randomly drawn winner via rafflecopter during the tour.