80s rock star, Haley Rose, and her boyfriend went missing without a trace on October 31, 1988, and were eventually presumed dead. Three decades later, thirty-year-old, Rowan Beckett, recalls things only Haley Rose would know, and she can belt out songs in the same unique fashion. However, Rowan couldn\’t be the missing rock star since Haley would now be in her fifties. Could Haley Rose have come back reincarnated as Rowan Beckett? Or is Rowan as delusional as her family suspects?

He didn\’t know what was wrong with him. He never felt an attraction toward a woman as intensely as he reacted to Rowan just now. It was like the air had been sucked out of the room, and she was his lifeline. If he glanced away, he\’d perish. No, that wasn\’t entirely it. If he even blinked, he feared she\’d cease to exist.

\”Would you like a cup of coffee while you wait?\” Katie thankfully spoke up, drawing Rowan\’s concerned expression away from him and his weird-ass meltdown.

\”Coming right up,\” he blurted out a little too loudly, but it finally snapped him out of his bizarre trance. He hurried away or rather sprinted if truth be told. He needed to gather his composure, or Rowan would surely hightail it right out of here with the wrong impression of him, and he\’d be out a manager. Worse, he would never have a chance to grasp why he wanted to know all there was to know about her.

Was it hot in here? Shit, he was sweating. Anxiety would do that to a man, but what was he so anxious about?

By the time he returned with the tea, he would have thought Katie and Rowan were friends catching up on old times. Rowan was telling Katie about how she carved giant pumpkins last Halloween to look like Frankenstein\’s Monster and the other to look like Dracula.

\”Earl Grey latte with a splash of vanilla,\” he announced his arrival and slid the cup toward her on the bar.

Rowan\’s face paled, and she stared at the cup as if he handed her some exotic concoction, she should be wary of sipping.

\”Is something wrong?\” he asked, concerned over her odd reaction toward a cup of tea.

She finally met his gaze, her big blue eyes wide and curious. \”How did you know this was the way I take my tea?\”

An Interview with Karen Michelle Nutt

Reading books and going to the theater. I wanted to write plays, and some of my first stories were scripts. My debut was in fifth grade when my teacher let me cast some of the students to star in my play. The stage was the front of the classroom, but it was still very exciting.


-If you could visit your book\’s world for a day, what one thing would you do?

I\’d enter the Heart and Soul, order a cinnamon oat milk latte and sit back and enjoy the bands that are being hosted for the night.


-It\’s two in the morning. What does your protagonist reveal in confidence? (Don\’t worry, we won\’t tell.)

Katie, who works at the coffeehouse. I think she\’d be a lot of fun to hang out with, but that may be because I put a lot of my cousin\’s personality into the character. My cousin, Katie, passed away, and in a way, this keeps her memory alive. She\’s not really gone but working at the Heart and Soul and enjoying music.


-You\’re in a tavern, and a dwarf challenges you to a duel. What do you do?

Of course, my choice of weapon would be a violin, and my second, who just so happens to be a talented musician, will step in. The Dwarf my also choose a musician. The two violinists, who also sing, will entertain the patrons in the tavern as they duel to win with their talented bow and strings. The violinists who receive the most applause wins.

I probably would never write erotica romances. I do have love scenes in my books, but some of the explicit descriptions the erotica romances require wouldn\’t flow easily from my fingertips. 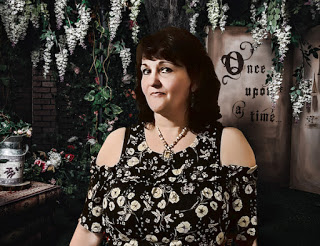 Karen Michelle Nutt resides in California with her husband. Though her three children are grown and starting their own adventures, she still has a houseful of demanding pets. Jack, her Chorkie, is her writing buddy and sits long hours with her at the computer.

When she\’s not time traveling, fighting outlaws, or otherworldly creatures, she creates book covers at Gillian\’s Book Covers, \”Judge Your Book By Its Cover\”.

Whether your reading fancy is paranormal, time travel or contemporary romances, all her stories capture the rich array of emotions that accompany the most fabulous human phenomena—falling in love.

Karen Michelle Nutt will be awarding a $20 Amazon/BN GC to a randomly drawn winner via rafflecopter during the tour.

0 thoughts on “Interview+Giveaway: Heart and Soul by Karen Michelle Nutt”