A YA fantasy by Sara E. Tall 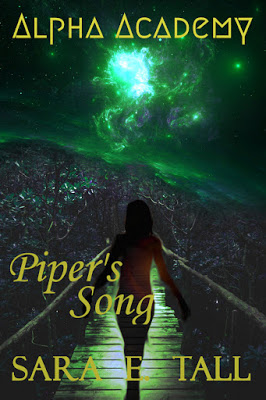 Billie thinks stopping her fellow students from committing murder and almost getting kicked out of the Realm is as bad as it gets, but she should know better. Not only are seven of the most powerful students out for her blood, but Sedna —her former enemy turned ally— turns her enemy again when Billie refuses a part in her revenge scheme. What’s more, Alpha Administration’s refusal to address the injustice in their school is sparking a full-on rebellion, and a lot of innocents are going to be caught in the crosshairs. It isn’t just the school either, the Realm itself is overrun with violence and hatred, which will have deadly consequences. Lucian, her self-imposed magical guru, insists Billie’s extraordinary magic is the key to stopping the flood of violence coming their way. Billie knows her magic is extraordinary, but she also knows its destructive power. It might do more harm than good.

Nothing said, “I’m sorry,” like a scalding hot iron mallet to the face. Especially when you were a Faerie, and allergic to Iron. Saranya and her friends really knew how to make a girl feel special.

At least, we heard they were going to attack me with a mallet, it was hard to keep up with all of Saranya’s schemes to get revenge on me for preventing her from torturing another student. The nerve of me.

I tightened my grip on the empowered soap Iris, my roommate, had given me. It paid to be friends with an Elf, I’d learned, as they possessed the ability to infuse magical properties into a variety of house-hold objects. And all she ever wanted in return was my help getting books down from her top bookshelf.

“Uhh, Billie,” Thea, my other roommate, said. “Perhaps it would be in your best interests to not look so tense? We are supposed to be discussing a class project, after all.”

I loosened my grip on the soap and gave her a quick smile. Thea was terrified of Saranya and the others, but that hadn’t stopped her and Iris from telling me about their plan, or offering to help me thwart it. She had a lot to lose, too. As a Wizard, she had a certain image to keep up, and helping a Misfit against other Wizards would do nothing good for that image.

An Interview With Sara E. Tall

I’d say I have two main inspirations. One was all the sword and fantasy games me and the neighborhood kids used to play. I don’t have the energy for that kind of creation anymore, so I write it down instead. I’d also say the books I read as a kid were a huge inspiration. The thought of being able to create entire worlds and people that others could read and enjoy seemed like the most amazing thing in world. Spoiler alert: it is.


-If you could visit your book’s world for a day, what one thing would you do?

To be honest, I’d try to avoid the people as much as possible and head straight for the mountains and other remote nature locations(Which is what I do in this world a lot of the time too.) The natural landscape of the Realm is every naturalist’s dream. Don’t get me wrong the people in the Realm as fascinating, they just think they are better than humans, and that would get annoying real fast. If I thought I could avoid people I’d also sneak into the dome of the Academy. It contains dozens of huge, animated murals that depict parts of the Magi’s history and culture. I think I could study them for hours.

Billie’s terrified of her magic. No matter how much her mentor, Lucian, insists that she can learn to control it, she can’t help but feel like her power is too much for someone like her. She’s afraid the next time she loses control, she’ll take someone’s life. She knows she couldn’t live with that.

Drum up those old sword-fighting skills I developed as an adolescent and hope that’s enough to keep me from making a fool of myself. It probably wouldn’t be, but I can lean of the side of optimism.

You know, I think I have story idea for just about every genre, though whether or not I can actually write these stories is another question. I think the hardest would be Science Fiction. I tend to put most of my focus on characters, and I think for Science Fiction to work you need a really intriguing concept that pushes the boundaries of the possible, and those types ideas don’t call to me as much.

Sara’s enjoyed creating fantastic stories since she was old enough to hold a play sword, around the time she learned how to walk. Gradually she learned to direct her creative energy into writing, and it’s been a downward spiral ever since then. When she’s not writing she’s probably either dancing or reading batman comics. She also loves running away to the mountains of Utah and Montana. Nothing gets more fantastic that those views.

Sara E. Tall will be awarding a $15 Amazon or Barnes and Noble GC to a randomly drawn winner via rafflecopter during the tour.