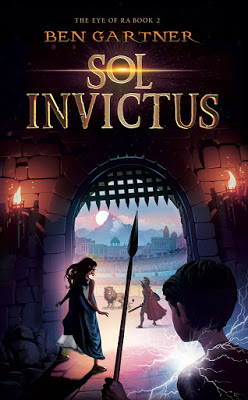 Siblings John and Sarah barely made it home last time, but in their next time traveling adventure the challenge really heats up. Surrounded by clashing cultures on the ancient Roman frontier, they must fulfill their quest to unite the emperor with his enemy, an Alemanni barbarian, or risk being stuck in time forever.

The man who had been covered in a rockslide and then taken away by police. The tomb robber. The ancient Egyptian time traveler. Memories of their last adventure barraged Sarah’s brain like an overwhelming lightning storm. Then her survival reflex blared in alarm.

She swung the scepter toward Aten, and the man recoiled.

“No, you must go,” Sarah replied, shaking the scepter and moving John behind her. Aten blocked their exit.

“I am but a humble messenger sent by the gods.” He put both hands in the air and flicked his eyes toward the ceiling. “Sent by Ra and Khonsu, the gods of the sun and the moon, of light and travel.” He looked down to Sarah and John. “The gods have chosen you. And so you must go.”

“What does that mean?” John asked. “How did you get out of jail?”

Aten grinned. “The gods visited me in my prison cell, where I swore allegiance to them. Yes, I was a thief and a liar, but I have seen the light of Ra and repented. It was they that gave us the power to travel through time. In return for my fealty, they rescued me from that foul place. I will not hurt you, but nor will I fail the gods. You will meet them too someday, when the time is right, and you will see. But for now, you will trust me because I have traveled through the eye of Ra just as you have.”

The hairs on Sarah’s arm tingled.


~Buy Sol Invictus on Amazon
~Follow the rest of the tour

I read the previous book in this series (The Eye of Ra) and very much enjoyed it. So when this came up for review, it was an easy decision. No regrets. This book takes the previous book and expands upon the characters and world, which all leads to a satisfying conclusion. And it looks like there are more books coming, which is fine by me.

I loved the expansion of the main characters. The sibling relationship felt so real, and the emotions were genuine. I found myself cheering for the good guys and feeling badly for some of the bad guys. I love that this series isn’t black-and-white in terms of bad vs. good. Makes for very interesting reading.

All in all, this was developed well and a joy to read. I look forward to more in this series or from a new series by the author. 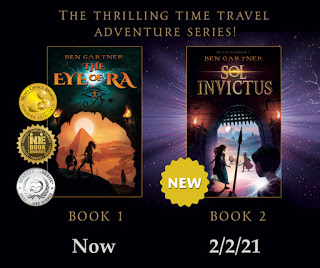 Ben Gartner is the award-winning author of The Eye of Ra adventure series for middle graders (ages 8-12). His books take readers for a thrilling ride, maybe even teaching them something in the meantime. Ben can be found living and writing near the mountains with his wife and two boys.

Ben Gartnerwill be awarding a $20 Amazon/BN GC to a randomly drawn winner via rafflecopter during the tour.