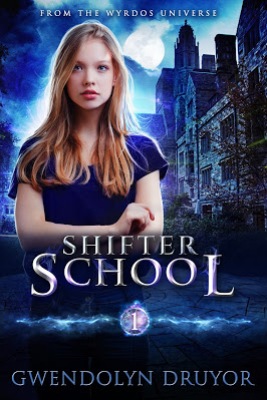 She’s gonna get them all killed.

So they locked her away.

All that is about to change.

In a world hidden from wyrdos and humans alike, shifters are still recovering from a vicious plot to destroy them all. They have two laws they live by now:

2) Protect the children at all costs.

Laylea has just broken rule number one. But she’s only fourteen. So they’re sending her to school. Where she’s going to learn . . .

Anyplace can be a prison.

The Lincoln Park Shifter School is not your grandma’s uber-secret, underground academy.

EXCERPT
Normal fourteen-year-olds don’t wake up thinking about death. But Laylea wasn’t anything close to normal. She woke up composing a letter to her adopted parents telling them all the things she’d never get the chance to say in person. Sometimes she thought of writing a letter to her brother, Bailey. Some mornings she imagined leaving a letter for her birth mother too, in case they ever found her. Laylea had been composing the morning letters ever since she’d gone to a veterinarian’s office on a case last summer. Waiting in the lobby for the tech she was following, she’d read every pamphlet the clinic had. Including one that said the average lifespan for a twelve-pound terrier was thirteen to fifteen years.

AN INTERVIEW WITH GWENDOLYN
-What inspired you to become a writer?

Books. I lived in them when I was a kid. I wasn’t allowed to read for pleasure during the school year because I would never do anything else. But during the summer, if my mom didn’t know where I was, she could count on finding me up in the nook of the great tree reading. Once my Sixth Grade teacher, Mr. Frazier explained that I, too, could write the stories in my head, it was all over. My mom says the first time I ever showed interest in anything was when he assigned me to write a play. I sat at Dad’s desk in the family room and worked at it for weeks. Usually I did my homework under my desk during class. Finally, I’d found something that was challenging and fun.

I would go to The Office in the fall, buy two mugs of Glög from Seb, and demand Ned tell me what the knitting is all about! Then I’d lie, cheat, and steal my way into the Lincoln Park Shifter School, find the underground jungle, and just float down the river.

And she’s scared that she’s so angry.

If I go to Seb’s, I don’t have to pick just one. But I’d like to take Ms. Crow with me. She’s a woman who needs a couple tequilas in her and a girlfriend to share her secrets with. I also suspect she hasn’t been out of the school in at least a decade. So, we’ll go day drinking at a Karaoke bar and then grab some pastries and end the night at Seb’s. I suspect she and Amal could talk books for hours.

I choose double stick, Dee as my second. He’s used to fighting with an axe so double stick will go against all his muscle-memory and instincts. Plus, Dee is a banshee so he’ll keep peeking looks at her to see if one of us is going to die soon. Keep him off-balance and unfocused. When I win, I will be gracious and offer to trade recipes for our favorite fighting bread. I put currents and sunflower seeds in mine. Seeds in the teeth are very distracting.

I can’t say never. I used to hate romance novels. I have said as much in public forums. But now I’ve read R.A. Steffan’s Lion Mistress series and Diana Gabaldan and apparently the Sookie Stackhouse novels are romance. So, I guess, I like some romance. And I like love. I’m told my Geoffrey’s Queen is a romance novel. So, even though I get annoyed by predictable, unrealistic, formulaic romances and I hate hyper-masculine, a woman loves a man who takes control-type romances, I could write romance. I would love to write a romance as compelling as Pride & Prejudice. I don’t think I’d write a Happily Ever After though. It’s not in my nature. I like torturing my characters.

Gwendolyn Druyor was born at the Quonset Point Naval Air Station Hospital, North Kingston, RI. The ID bracelet wrapped three times around her little wrist. She could swim before she could walk and read before she started school.

She has traveled the world telling stories. After a year in Amsterdam writing and performing sketch comedy at Boom Chicago, she toured North America with Shenandoah Shakespeare and with the incredible educational show Sex Signals. From Paris, FR to William’s Bay, WI, you’ll find her gypsy life reflected in her books. If you met her on the road, read her closely, you may find yourself in there.

For now, Gwendolyn lives in Hollywood with her Irish Jack Russell, Josh Lyman Zyrga, who is still pouting over the fact that she didn’t put him on the cover of WereHuman.

For more information on Gwendolyn and her projects sign up for her newsletter.

Gwendolyn Druyor will be awarding $50 Amazon/BN GC to a randomly drawn winner via rafflecopter during the tour.