THE ONE APART by Justine Avery

THE ONE APART
by Justine Avery 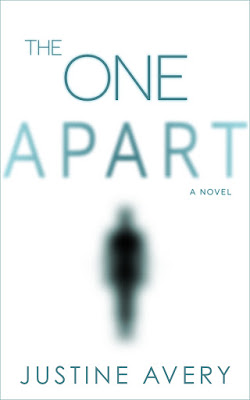 Only one obstacle stands in his way of enjoying a normal life. He remembers—every life he\’s lived before.

Tres is about to be born… with the biggest burden any has ever had to bear. He is beginning again—as an ageless adult trapped in an infant body.

He and his teenage mother face life filled with extraordinary challenges as they strive to protect, nurture, and hide how truly different he is. But Tres alone must solve the greatest mystery of all: who is he? The answer is linked to the one question he\’s too afraid to ask: why am I?

In his quest, Tres discovers that all is considerably more interconnected and dynamic than he could ever imagine—and fraught with far more danger. He cannot hide from the unseen threat stalking him since his birth.

Life as he knows it—as all know it—is in peril. And Tres is the only one aware.

EXCERPT
Tres felt his body abruptly drop around him with overbearing weight, encapsulating him once again.

The mental images, the overpowering memories, finally faded. Only an ominous stillness remained.

Every cell within him began to twitch, infusing with energy—even as he felt immobile. Every joint, tendon, and bone ached under the pressure of being alive.

A deep sadness engulfed him. He pondered possible reasons. And, just as quickly, he was distracted by the presence of his own simple thoughts.

Thoughts. He realized his own thinking.

This mind—certain of its own newness—desired to explore, feel, do, be. Tres opened his eyes—tried to open his eyes. He found his eyelids fused shut.

He opened his mouth. Thick, warm syrup seeped inside his swallow. Intense fear washed over him, even as he knew exactly where—and how—he was.

Tres was aware, more aware than any had ever been. In this moment, he knew everything—and yet, nothing.

He was beginning again.

~Buy THE ONE APART on Amazon

AN INTERVIEW WITH JUSTINE
-What inspired you to become a writer?

A love for reading inspired me to become a writer. I think it’s natural for all of us who love to read to be drawn to the idea of creating our own stories, developing our own ideas, and giving readers that sense of surprise or happiness that we enjoy when we read a great story.

Hmmm… I have a choice of two different worlds in The One Apart. As the author, I’d be visiting with an awareness of both, unlike most of the characters involved in the story—lucky me! So, with both aspects of “life” to explore, maybe I would try to spot my own OnLooker and communicate with him/her. Now, you’ll have to read the novel to discover who/what that is!

-Give us a fun or interesting fact you learned researching this book.

I had a lot of fun researching child development: a baby’s physical limitations after birth and when different abilities start to develop. One neat fact is how babies have the ability to see colors when first born but aren’t able to distinguish well between many of them until three or four months old, and suddenly, their brightly colored toys are much more exciting to them!

Every single one of them! There are amazing qualities about each of them, and they’ve been through so much. I’d love to ask them how they feel about all their experiences, get to know them yet better. Even the darker characters are fascinating with their clashing motives and desires.

I accept the duel, but dictate that the choice of weapons is mine alone. I choose pillows!

I could never say “no” to any genre. I love to read them all, so for me, every story I write mixes a little of everything… like life does.

Justine Avery is an award-winning author of stories large and small for all. Born in the American Midwest and raised all over the world, she is inherently an explorer, duly fascinated by everything around her and excitedly noting the stories that abound all around. As an avid reader of all genres, she weaves her own stories among them all. She has a predilection for writing speculative fiction and story twists and surprises she can’t even predict herself.

Avery has either lived in or explored all 50 states of the union, over 36 countries, and all but one continent; she lost count after moving 30-some times before the age of 20. She’s intentionally jumped out of airplanes and off the highest bungee jump in New Zealand, scuba dived unintentionally with sharks, designed websites, intranets, and technical manuals, bartered with indigenous Panamanians, welded automobile frames, observed at the Bujinkan Hombu Dojo in Noba, Japan, and masterminded prosperous internet businesses—to name a few adventures. She earned a Bachelor of Arts degree that life has never required, and at age 28, she sold everything she owned and quit corporate life—and her final “job”—to freelance and travel the world as she always dreamed of. And she’s never looked back.

Aside from her native English, Avery speaks a bit of Japanese and a bit more Spanish, her accent is an ever-evolving mixture of Midwestern American with notes of the Deep South and indiscriminate British vocabulary and rhythm, and she says “eh”—like the Kiwis, not the Canadians. She currently lives near Los Angeles with her husband, British film director Devon Avery, and their three adopted children: Becks, Sam, and Lia. She writes from wherever her curiosity takes her.

Avery loves to connect with fellow readers and creatives, explorers and imaginers, and cordially invites you to say “hello”—or konnichiwa.

Justine Avery will be awarding a $10 Amazon/BN GC to a randomly drawn winner via rafflecopter during the tour.

3 thoughts on “THE ONE APART by Justine Avery”