A paranormal novel by Barb Jones 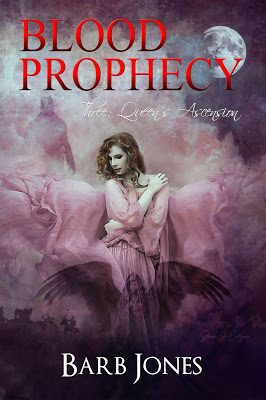 When the darkness was compelling and the heart knew no bounds, was there really a right choice? With Michael\’s life hanging in the balance, Amber had a choice: save her star-fated love or keep on the crusade to unite the magical community. For Amber, her fate was sealed even before her birth and it was her destiny to fight the great battle ahead of her. But, when it came to her heart — her friends, her great love — Amber\’s torn. Not only was she the Queen, but she was a human in every sense of the word. She was vulnerable. And so the very people — Chloe and Michael — that gave her strength, quickly became her weakness. It wasn\’t her fault she loved too much, was it?

Nevertheless, the Tall Dark Man had set a plan in motion that could threaten the very existence of the Blood Prophecy. Would he gather his dark forces and succeed in destroying Amber once and for all? Or, would she assemble her powerful friends and save the world?

With the betterment of both Michael and Rae, Malakai was glad that they were well and fine; nevertheless, he needed some time to decompress. All the magical commotions that had occurred were too overwhelming for him. He needed some sort of release.

He enjoyed the brisk jog in the park, as he cut through the sharp wind of the cold night. But this did nothing to lift his spirits. He was happy that Amber’s smile finally met her eyes. That was all he’d ever wanted for her: happiness, that’s it. There was nothing more he could ask for—she was his priority. Yet, in the back of his mind, as in his heart, he couldn’t help but believe the ancient legend that he’d heard so long ago was the certifiable truth, as it was written in Eschmun’s scroll.

…her fate is tied to the true alpha of the wolves. A blood drinker will stand formidable, but it is the nature of the child to call upon the true alpha and bring him to the queen’s inner heart.

Could this be the truth? he often wondered as he traveled the world collecting artifacts and evidence supporting this notion. Yes, he’d crafted a reliquary, quite accidentally, and people assumed it was to keep the magic insulated, away from the humans. But that wasn’t the case, at least not for him. He so wanted to believe, just from the sheer fact that it was said in the scroll. But Malakai was a man of logic, driven by cold hard data. Although wanting to romanticize that his destiny was tied with Amber’s, he needed confirmation. He wanted validation for the strong emotions he was feeling.

An Interview with Barb Jones

I always told stories as a small child and when I was about 9, my teacher and my parents suggested that I put these stories on paper. All I had to do was try. I think it was because of their words of encouragement and empowerment that made me practice not only my story telling but my writing.


-If you could visit your book’s world for a day, what one thing would you do?

Well, the series takes place in Seattle and that being home to me as well as Hawaii and Florida, I would have to say I would spend the day really exploring the Underground more. The Underground serves as a place in which the Vampire King and his demonic allies plot to destroy Amber and turn the prophecy towards The Tall Dark Man.

Considering Amber is a vampire, she reveals that she longs to be human again. She misses that part of her life.

I would have to say Kabos. I would love to pick his brain regarding the prophecy.

I would first place a wager with the dwarf. Loser must rebuild the tavern (if the duel takes place there). And of course, find a suitable weapon and prepare to duel!

I don’t think I could write erotica or anything like that. Sure, there are intimate scenes in my books but they don’t go to that extreme. But I would be afraid to offend some readers with that so I tend to focus more on the prophecy part.

I was born in Hawaii, a place rich with culture and storytellers. As a little girl, scary tales about vampires, werewolves, angels, demons, and witches were my favorite kind — much to my mother\’s dismay. The scarier, the better.

My love for the supernatural never went away, even after moving to Seattle, far from Hawaii\’s majestic beaches with unusual colors. Nothing compares to the landscapes of Maui, Lanai, or Oahu. But somehow, Seattle stole my heart anyway. It became the place where my love for stories took on a new form, in a book of my own: The Adventures of Little Arthur and Merlin the Magnificent. This book is for kids who love stories, just like I did.

Then I had an idea while sleeping.

One night, my mind began to work overtime. In a dream, I saw a unique storyline involving all the races and an epic battle of good versus evil. It was a modern day plot with a three thousand year old prophecy, The Blood Prophecy. I finished the first book in 2014, The Queen\’s Destiny. Two years later, I released The Queen\’s Enemy. The last book in the series, The Queen\’s Ascension, released on August 17, 2020.

Today, I live in Florida with its beaches and sunshine. But I\’m still a Seattle girl at heart. And so all my stories take place in the Northwest.

I always keep to my roots when I write.

Barb Jones will be awarding a $15 Amazon or Barnes and Noble GC to a randomly drawn winner via rafflecopter during the tour.