BETWEEN VENUS AND MARS by S.C. Mitchell

BETWEEN VENUS AND MARS
by S.C. Mitchell

Zana Starchild is on a mission to restore her tribe’s livestock and save herself from one more meal of kelp. Sure, it’s technically illegal to visit Old Earth, but to a rim rat like Zana, galactic laws are really just guidelines. Her wrecked starship just means she’ll need to use her backup plan to get off the abandoned world, an old Earth legend her uncle passed down to her.

Pulled from a relaxing shower, across the galaxy to Old Earth, Galactic Marshall Kyle Kepler finds himself naked and marooned with a quirky rim rat. Zana’s broken more laws than Kyle can count, and he plans to arrest her, just as soon as he can find transport off the planet and a pair of pants.

A junk heap of a starship, a magical tree, and a roving gang of mutant kangaroos are just the beginning of rollicking intergalactic journey filled with laughs, love, and adventure.

EXCERPT
Gasping, she reached the top of the hill, her eyes glued to the tree. This had to be her uncle’s Soul Mate Tree.

She scanned her surroundings. Not another tree in sight anywhere.

“Not really the way I planned on meeting Mr. Right.” She’d decided to avoid that little occurrence indefinitely. In her experience, men were nothing but trouble. They wanted sex, which meant babies, which meant settling down. And they wanted to control everything.

Nope, not ready for that.

According to her uncle, she just needed to touch the tree for it to work its magic.

She reached out, palming the bark as she scurried around to put the trunk between her and her pursuers. “Come on, tree. Get me out of here. Any time.”

She hoped her Soul Mate didn’t turn out to be Andel Narkol. The boy was big and strong, but dumb as a stump. Kennen Plankold had a little more sense, but his nasally voice . . .

Maybe it will be someone I don’t even know yet. Though she was pretty sure she’d met all the eligible men on Konga 10.

“What the hell!” Deep, golden, bassy tones exploded behind her.

“Stupid tree. You were supposed to send me to him, not bring him here.”

Her hand shook as she fired at the first roo to crest the hill. She missed by a mile.

What the hell was she supposed to do now?

“Give me that.” A large, well-muscled, bare arm reached over her shoulder to snatch the blaster from her hand. “Teleporting sentient beings is against galactic law,” he snarled.

Great, the love of her life sounded like a cop. Still, he had a big, bumpy, delicious looking arm.

~Buy BETWEEN VENUS AND MARS at Amazon as Kindle or Print

REVIEW
Laugh-out-loud funny and sweet. I read BETWEEN VENUS AND MARS in one sitting. I’ve been on a major scifi kick lately, and it came time for me to read this book. For my scifi kick, it did not disappoint, and the romance was so satisfying.

The two main characters of this story come from two different worlds, literally and figuratively. But that doesn’t stop them from working as a couple well. Zana is from a primitive-ish outlying world and is on a rather illegal mission to find food for her starving people. Kyle is in law-enforcement, which creates nice tension against the rather illegal nature of Zana’s quest. Both are fully realized characters I could totally see myself having coffee with, especially Zana. Her consistent bad language should be at odds with her innocence (sexual and otherwise), but it’s not at all. She actually reminded me of a younger version of myself a little. By contrast, Kyle does not curse (for the most part). One might expect the character who’s in law-enforcement to be more crude, but this role reversal of sorts was just great.

The humor is spot-on. I especially love the tree’s “help” in getting Zana and Kyle together. On the opposite end of the humor is a truly sweet romance and seriously dangerous situation for Zana. It all balances perfectly into an action-packed, heartfelt and funny package.

Lastly, I loved the incorporation of earlier stories in the Soul Mate Tree series as reference materials for Zana to figure out how the tree worked. I’m the person who loves when actors are given lines that refer to another movie they were in, and this felt like that. So cool. I recommend this book to anyone wanting a quick read with a little bit of everything. 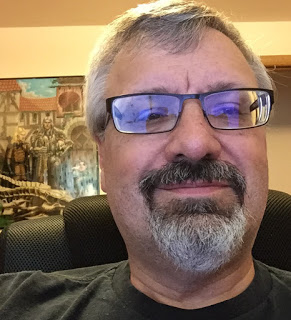 S.C. Mitchell grew up an avid reader of comic books, science fiction and fantasy literature. He’s been writing stories for over thirty years. In 2010 he left his job as a computer desktop support specialist to pursue his passion for writing full time. He is a PAN member of the Romance Writers of America as well as the Wisconsin chapter.

As a writer of paranormal, sci-fi, and fantasy romance, S. C. Mitchell crafts unique and wondrous worlds where characters explore, romp, and fall in love. Whether traveling through dark, demon filled dimensions, the edge of wild space, or ancient mythological heavens, heroes and heroines, guided by their adventurous hearts, discover hidden strengths on their pathway to enduring love.

S.C. Mitchell will be awarding a $25 Amazon GC to a randomly drawn winner via rafflecopter during the tour.

15 thoughts on “BETWEEN VENUS AND MARS by S.C. Mitchell”