A sci-fi romance by Linda Nightingale

But four of their Special Editions—sentient androids indistinguishable from human—have escaped. Rebel, Christian Aguillard and his owner, March, are on the run, but they have a bigger problem than his creator\’s plan to destroy him. They\’ve discovered that one of the renegades has suffered a dangerous malfunction, threatening them with more than just exposure.

Trapped on a cruise ship in the middle of the Atlantic, March and Christian must stop the insane robot before someone else dies. All the evidence points to March being the killer\’s next victim.

“Why are you here? To spout more nonsense?” Spitting mad, Monica reared up in her enemy’s face.

“Not at all.” March’s hand flashed, almost too rapidly for Monica to see, and came down hard below her nose in a Judo-like attack.

Shocked and in pain, she stumbled back, switching modes as she pushed off the bed. “That’s it, whore. You’re a dead woman.”

“I don’t think so,” her rival gritted out, hands braced on her hips, her expression as cold and hard as her mediocre brown eyes. She shook her head. “Look, Monica, I know you’re aware of your actions. I’m going to give you a chance. You must deactivate until we can safely transport you to Dr. Cross for testing. Surely, you know something is wrong.”

“You didn’t mention Anne.” The other woman seized Monica’s arm. “What did you do to Anne?”

Claws out, Monica lunged. March darted beneath her guard, stabbing at a spot beneath her left earlobe. Monica shoved her back. “Looking for my off switch, fool? It’s well hidden, like where Ms. Goodie Two Shoes wouldn’t even think about going.”

Her insane human rival stood at the locked door, her stance as much as saying to leave Monica would have to get past her. No prob. She stalked toward her rival, murder in her eyes. March didn’t move. When Monica threw a punch at her eye, she moved by the gods.

The American whore lurched back, crossing her arms across her face, anticipating Monica’s next attack. Forearm struck forearm. A human bone should break, but March stood her ground, her limb intact. She recovered too quickly, dealing Monica a hard blow beneath her cheekbone, barely missing her eye, slamming her back against the wall.

“I don’t know what you are, March Morgan,” she sneered. “But it’s not going to save your butt.”

“No, but I am.” Looking like an avenging angel, Christian—in a Houston t-shirt and khaki shorts, his long hair disheveled—had somehow appeared behind March without either of them hearing.


~Buy Life for Sale on Amazon
Also get book 1, Love for Sale 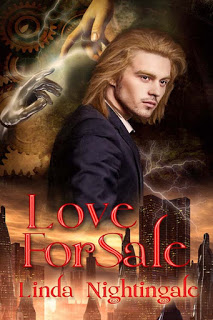 Q.
How much (if any) of this book do you think predicts the future of android technology?

Most of it. It may take 10-20 years to achieve the programming necessary for android feelings and complete autonomous movement (able to walk on human-like legs), but robot technology is on its way to achieving the Special Editions in Love for Sale and Life for Sale. The Special Editions are totally human in almost every way. They do not eat (no digestive system). In Sleep Mode, they must be near a power outlet to absorb energy. Tears and other bodily fluids must be replenished by infusions into the android’s body. This only occurs every ten years in normal use.

In Life for Sale, one of the four androids who escaped their creator has a serious malfunction. Let’s hope that by the time the completely human androids are being sold for companions, this possibility will have been resolved. Even now, robots are being used as companions for the elderly, in nursing homes, and as teachers with success.

To add to the pages of sci-fi happening as we speak, humanlike robots are in development that will come near to mimicking human emotions and facial expressions. These robots are in their infancy but amazing!

Recently, Toshiba introduced Junko Chihira, a very realistic human-like android. She is 5’5”, 26 years old, and her birthday is 6/1. She works in a new tourist information center in Japan. The android speaks Japanese, Chinese, and English—handy if you work in the tourist trade. A hotel in Japan has a robot staff though I read they hat to fire ½ of their robot workers. I wonder if it was for sexual harassment! A female android named Geminoid F stars in a Japanese film from director Koji Fukada. \”Sayonara\” premiered at the Tokyo International Film Festival.

Erika is a creation of Osaka University, Koyo University, and ATR. She was ‘born’ in Japan in 2015 (the year Love for Sale was published). When Erika is listening, she blinks and moves her eyes and head. The following link is a YouTube video of Erika and a child, illustration AI’s possibilities with children. She is pretty and interacts well. She pauses while she processes in this conversation, but her answers do not sound at all scripted but real-time. 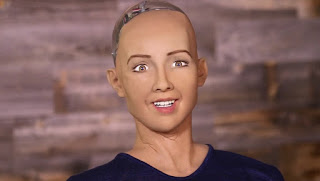 Probably the most life-like is the android Sophia by Hanson Robotics. Sophia has appeared on The Tonight Show as well as addressed a UN committee. She has been granted citizenship by Saudi Arabia.

Hanson boasts other robots, one designed to look like Einstein.

In 2005, Hanson debuted Philip K. Dick II. He was designed by David Hanson as a robotic version of the popular writer of sci-fi. The original Philip K. Dick android was lost on a flight from Dallas to San Francisco in late 2005. However, in 2011 Hanson Robotics, together with Dutch broadcasting firm VPRO, developed a new version, including state of the art computer vision technology. This robot employs 36 servomotors to power a complex and wide range of facial expressions. These days, PKD serves researchers at the Apollo Mind Initiative.

These are just a few representatives of the strides we are making in humanoid robots. The androids in my books, all products of imagination, are getting closer.

Would you buy one? I would.

After 14 years in Texas, Linda returned home to her roots in South Carolina. She has 8 published novels, four of which are available from Audible.com in audio. For many years, she bred, trained and showed Andalusian horses. So, she’s seen a lot of this country from the windshield of a truck pulling a horse trailer. Linda has won several writing awards, including the Georgia Romance Writers’ Magnolia Award for Excellence, the Raven Award in Anthologies, and the SARA Merritt. Sinners’ Opera is a finalist in the 2020 Raven Awards. She loves horses, sports cars, music, reading, writing, and piano—oh, and dressing up and hosting formal dinner parties.

Linda Nightingale will be awarding a $25 Amazon or Barnes and Noble GC to a randomly drawn winner via rafflecopter during the tour.

0 thoughts on “Guest Post+Giveaway: Life for Sale by Linda Nightingale”