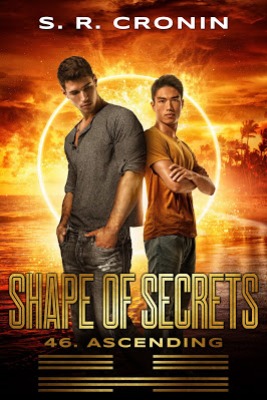 Seven year old Zane vowed to become a superhero. As a child too smart to fit in, he studied chameleons and muscle groups to learn to alter his appearance.

Now Zane is starting his first job at Penthes Pharmaceuticals, where he finds layers of corporate secrets and learns that knowledge is dangerous. Good thing he excels at blending in.

Once upper management discovers him, life gets more complicated. A sales trip to the South Pacific leaves Zane dealing with an unsolved murder, an unsavory boot camp manager, and new friends with abilities as surprising as his own and with problems far worse.

Zane wants to help them all. First, however, he has a few work-related issues to handle. Someone at Penthes will kill to protect mysteries the company has worked so hard to keep hidden. He has to figure out who, and then use his unique talents to stay alive.

EXCERPT
As one boy came close to the bushes where he hid, Zane saw his own bare foot sticking out over the orange-brown soil. He dare not move it, so he thought hard about his foot and tried to flatten it tight against the ground.

The skin on his foot had started to burn and itch, and an alarmed Zane saw his foot was blushing. At least, it had turned an orange brown that mimicked the dirt. It had been his first inkling he could do more than make his body\’s shape twist and warp. Zane watched his orange brown foot in fascination while the neighbor boy ran by.

Every so often after that, Zane\’s skin would surprise him in the same way his muscles did. He could feel a color change coming, but didn\’t know how to control it. He figured he needed a wise teacher, like Balthazar.

\”Can I learn to do that when I want to, wise one?\” he asked his chameleon. He tried to make the feeling he felt when his skin did this. He concentrated hard on his arm. At first nothing happened. Then, yes. He felt the feeling. He made the feeling. His skin went from its normal color to a tan orange.

\”You and I are going to be great friends,\” Zane told Balthazar as his grin widened. \”You can teach me ways to fight bullies and you\’ll be the only one who knows what I can do.\”

Other books by S. R. Cronin

REVIEW
Cronin does it again with another thought-provoking and expertly woven tale of the human condition and what special gifts can do.

Having read the previous installment in this group, One of One, I found the parallels between the storylines to be fascinating. It was interesting to see how this book’s events played out in relation to the events in One of One. That said, it is not at all necessary to read One of One to understand or enjoy Shape of Secrets. Having read both, I have to hand credit for a conversation that appears in both books and gives Zane the push to really get his journey started. It’s amazing to see the impact of both sides of a discussion, something we don’t get often in real life.

The characters struck me as so realistic, especially the main four. I loved the crew of four and their excursion at sea. Each of these characters comes from some kind of trouble (some more than others), and I loved watching them come together to form an amazing family. I also loved the clever ways they found to fix their problems. I also set aside a special place in my heart for Zane’s boss—a man with good intentions that went astray. Who can’t relate to that?

Like One of One, this book is not necessarily action-packed or fast-paced. It is suspenseful, but the suspense is of an intellectual kind. There are tense moments, but if you want edge-of-your-seat action, you won’t find it here. Instead, you’ll get an ever-tightening web of intrigue. Personally, it left me just as breathless as any high-octane thriller.

I highly recommend, not only this book, but the series. I’ve only read the first two, but I can just tell there are great things at work here. I look forward to seeing what adventures the rest of Lola and Zane’s family get up to.

Sherrie Roth grew up in Western Kansas thinking there was no place in the universe more fascinating than outer space. After her mother vetoed astronaut as a career ambition, she went on to study journalism and physics in hopes of becoming a science writer.

She published her first science fiction short story long ago, and then waited a lot of tables while she looked for inspiration for the next story. When it finally came, it declared to her it had to be a whole book, nothing less. One night, while digesting this disturbing piece of news, she drank way too many shots of ouzo with her boyfriend. She woke up thirty-one years later demanding to know what was going on.

The boyfriend, who she had apparently long since married, asked her to calm down and explained how, in a fit of practicality, she had gone back to school and gotten a degree in geophysics and spent the last 28 years interpreting seismic data in the oil industry. The good news, according to Mr. Cronin, was that she had found it to be entertaining and ridiculously well-paying. The bad news was the two of them had still managed to spend almost all of the money. Apparently she was now Mrs. Cronin, and further good news was that they had produced three wonderful children whom they loved, even though, to be honest, that was where a lot of the money had gone. Even better news was that Mr. Cronin turned out to be a warm-hearted, encouraging sort who was happy to see her awake and ready to write. \”It\’s about time,\” were his exact words.

Sherrie Cronin discovered that over the ensuing decades Sally Ride had already managed to become the first woman in space and apparently had done a fine job of it. No one, however, had written the book that had been in Sherrie\’s head for decades. The only problem was, the book informed her it had now grown into a six book collection. Sherrie decided she better start writing it before it got any longer. She\’s been wide awake ever since, and writing away.

S. R. Cronin will be awarding a $10 Amazon/BN GC and a kindle copy of One of One (the first book in the 46. Ascending Collection) to a randomly drawn winner via rafflecopter during the tour.