THE MAN WITH THE CRYSTAL ANKH 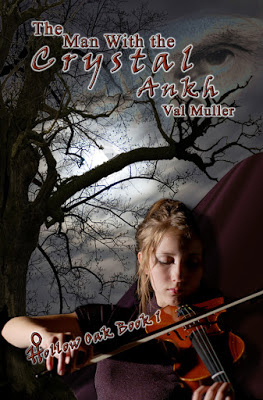 Everyone’s heard the legend of the hollow oak—the four-hundred year curse of Sarah Willoughby and Preston Grymes. Few realize how true it is.

Sarah Durante awakens to find herself haunted by the spirit of her high school’s late custodian. After the death of his granddaughter, Custodian Carlton Gray is not at peace. He suspects a sanguisuga is involved—an ancient force that prolongs its own life by consuming the spirits of others. Now, the sanguisuga needs another life to feed its rotten existence, and Carlton wants to spare others from the suffering his granddaughter endured. That’s where Sarah comes in. Carlton helps her understand that she comes from a lineage of ancestors with the ability to communicate with the dead. As Sarah hones her skill through music, she discovers that the bloodlines of Hollow Oak run deep. The sanguisuga is someone close, and only she has the power to stop it.

~Buy THE MAN WITH THE CRYSTAL ANKH on Amazon

THE GIRL WHO FLEW AWAY

No good deed goes unpunished when freshman Steffie Brenner offers to give her awkward new neighbor a ride home after her first day at school. When her older sister Ali stops at a local park to apply for a job, Steffie and Madison slip out of the car to explore the park—and Madison vanishes.

Already in trouble for a speeding ticket, Ali insists that Steffie say nothing about Madison’s disappearance. Even when Madison’s mother comes looking for her. Even when the police question them.

Some secrets are hard to hide, though—especially with Madison’s life on the line. As she struggles between coming clean or going along with her manipulative sister’s plan, Steffie begins to question if she or anyone else is really who she thought they were. After all, the Steffie she used to know would never lie about being the last person to see Madison alive—nor would she abandon a friend in the woods: alone, cold, injured, or even worse.

But when Steffie learns an even deeper secret about her own past, a missing person seems like the least of her worries…

~Buy THE GIRL WHO FLEW AWAY

EXCERPT FROM THE MAN WITH THE CRYSTAL ANKH
She picked up the instrument and set it onto her shoulder. A calmness passed into her, as if the violin exuded energy—as if it had a soul. The varnish had faded and dulled. Its life force did not come from its appearance. She brought the bow to the strings, which was still rosined and ready to play. Dragging the bow across the four strings, she found the instrument perfectly in tune.

Sarah took a deep breath and imagined the song, the way the notes melted into each other in nostalgic slides, the way her spirit seemed to pour from her soul that day. And then it was happening again.

She had started playing without realizing it. Warm, resonant notes poured from the instrument and spilled into the room. They were stronger, and much more powerful, than those she was used to. This instrument was different than the factory-made one her parents had bought for her. Rosemary’s violin was singing to the world from its very soul. And it was happening just as before. Sarah’s energy flowed from her body, causing her to lose consciousness and gain perspective all at once. She rode the air on a lofty run of eighth notes. She echoed off the ceiling with a rich and resonant vibrato. She flew past the guests, who had all quieted to listen to her music; flew past the table of cold cuts and appetizers and up the darkened staircase, where she resonated against the walls and found her way into the guest room. There, she crept along a whole note and slid into the closet.

As the song repeated, she twirled around in the closet, spinning in a torrent of passionate notes. She searched through the notebooks and books on the floor and on the shelves, searched for an open notebook, for something she could read, something that might make her feel tied to the place. Otherwise, she might spin out of control and evaporate out the window and into the sky. She found her anchor on the floor in the darkest corner of the closet, a large parchment—maybe a poster. The notes spun around her in a dizzying way as she tried to stay still enough to read what was on the paper. It was a difficult task; now, with every beat her body downstairs tried to reclaim its energy.

AN INTERVIEW WITH VAL
-What inspired you to become a writer?

It’s always been in my blood. Several elementary school teachers wrote me notes at the end of the year, encouraging me to continue my writing. My first-grade teacher took me to the fifth grade class to read a poem I had composed. But the real moment when I felt the power of words involved my dad, a Christmas poem, and snow.

My dad had me memorize “The Night Before Christmas” when I was around five. I never really thought about what the words meant; I simply liked the rhyming patterns. But one night, after a heavy snowfall, the skies cleared and the moon rose. My dad called me to the window and recited the line “the moon on the breast of the new-fallen snow gave the luster of midday to objects below.” Then he went through the lines, pointing out the reality of the imagery in the moon reflecting off the pristine and sparkling snow in our backyard. I realized that I could be anywhere, even on a tropical island, and would forever have that image attached to those words. From that point on, I saw words differently and knew they would impact my life.

If I could visit the world of The Man with the Crystal Ankh, I would track down Sarah Durante and see if she could help me experience what she does—going into a trance while playing the violin and in doing so, opening herself up to contact with ghosts. As a kid, my dad asked me to put into words my fear of the dark. I told him I was afraid of things like aliens coming down from the sky or ghosts materializing. His eyes became wondrous, and he told me he would LOVE to see a ghost or an alien. He couldn’t’ imagine they would take the time to approach us simply to hurt us, and he believed it would be a life-changing experience. I can’t say I’m really ever looking forward to seeing an alien or a ghost, but the experience would certainly stay with me for the rest of my days.

-Give us a fun or interesting fact you learned researching this book.

Researching witchcraft during the Puritan era, I came across several speculations about the cause of the witch trials. Some claim that the people were exposed to some type of hallucinogenic mushrooms. Other claim that the climate was changing during those years, and the unpredictable weather frightened people. And of course, there’s Arthur Miller’s long essays inserted into The Crucible about how personal freedoms and “downtime” were increasing, leaving people more time to get into trouble and more time to ponder their neighbors’ business.

-Which of your characters would you go out for drinks or pizza with? This would be a character from The Girl Who Flew Away. Sally is an adult aged beyond her years by a circuitous addiction to heroin. Beneath that addiction, she is an amazing and caring person with the best of intentions. I would want to hear through her voice what she wants out of life and how her addiction is hurting her. I’d also love to hear about her passions; when she’s winning the battle against her addiction, she is an inspiration. Although I’d hope to find a few minutes of fun with her, I’d choose pizza with her primarily as a way to reach out and help her—and use my knowledge to find ways of helping others in similar situations. Heroin addiction is a growing problem in this country, and it’s one that affects not only victims, but their families as well, and the more support we have, the better.

This sounds like one of my husband’s online RPGs. If that’s the case, I have all kinds of cool magic and weapons, right? Even with Magic Missile enabled, I would imagine my “speechcraft” would be at such a level that I could engage him in conversation first, asking him the reason for the duel. As a Scorpio and an INTJ, I’ve been told I’m somewhat manipulative, so I imagine I would be able to help him come up with a nonviolent solution to whatever it is that ails him.

I could never write “whodunit” mysteries for adults. While my kidlit series Corgi Capers always contains a mystery, it’s being told through several fun, kid-friendly perspectives (a rambunctious pair of corgis, a junior sleuth, or his tween sister), and the mystery is usually based on miscommunication or misunderstanding. When I read a whodunit, I have trouble keeping all the facts straight if I take any kind of break between chapters, so I don’t imagine I’d be very good at weaving together the details perfectly enough to lead my reader on without giving away the ending. I much prefer the fun twists of Corgi Capers and look forward to finishing the fourth book in the series, in which the characters tackle one of my greatest fears—a crippling blizzard.

ABOUT VAL
Teacher, writer, and editor, Val Muller grew up in haunted New England but now lives in the warmer climes of Virginia, where she lives with her husband. She is owned by two rambunctious corgis and a toddler. The corgis have their own page and book series at CorgiCapers.com.

Val’s young adult works include The Scarred Letter, The Man with the Crystal Ankh, and The Girl Who Flew Away and feature her observations as a high school teacher as well as her own haunted New England past. She blogs weekly at valmuller.com.